Mount Athosis a mountain and peninsula in Macedonia Greece. 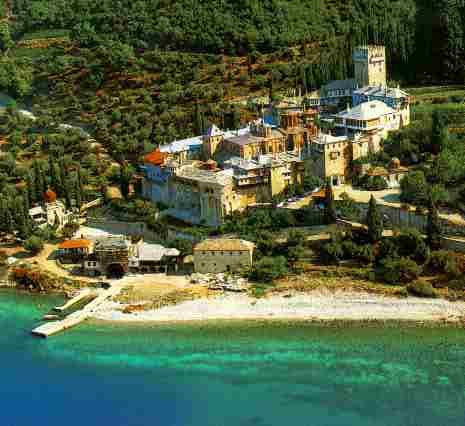 A World Heritage Site, it is home to 20 Eastern Orthodox monasteries and forms a self-governed monastic state within the sovereignty of the Hellenic Republic. Spiritually, Mount Athos comes under the direct jurisdiction of the Ecumenical Patriarchate of Constantinople. Today Greeks commonly refer to Mount Athos as the "Holy Mountain"

Though land-linked, Mount Athos is accessible only by a single boat, the St. Eshpigmenitis. The daily number of visitors entering Mount Athos is restricted and all are required to obtain a special entrance permit valid for a limited period.

Entry to the mountain is usually by ferry boat either from the port of Ouranoupoli (for west coast monasteries) or from Ierrisos for those on the east coast. Before embarking on the 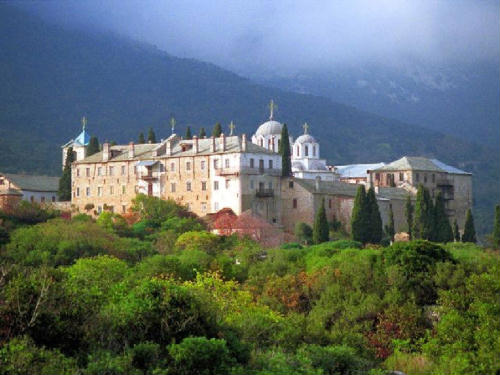 boat all visitors must have been issued adiamonētērion, a form of Byzantine visa that is written in Greek, dated using the Julian calendar, and signed by four of the secretaries of leading monasteries. There are generally two kinds of diamonētēria: the general diamonētērion that enables the visitor to stay overnight at any one of the monasteries but only to stay in the mountain for three days, and the special diamonētērion which allows a visitor to visit only one monastery or skete but to stay as many days as he has agreed with the monks. The general diamonētērion is available upon application to the Pilgrims' Bureau in Thessaloniki. Once this has been granted it will be issued at the port of departure, on the day of departure. Once granted, the pilgrim can contact the monastery where he would like to stay in order to reserve a bed (one night only per monastery). The ferries require reservations, both ways. 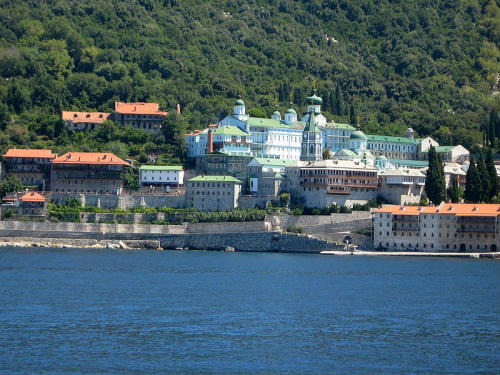 The duration of the general visa can be extended by several days by personally applying at the main office in Karyes.

Most visitors arrive at the small port of Dafni from where they can take the only paved road in the mountain to the capital Karyes or continue via another smaller boat to other monasteries down the coast. There is a public bus between Dafni and Karyes. Expensive taxis operated by monks are available for hire at Dafni and Karyes. They are all-wheel drive vehicles since most roads in the mountain are unpaved. Visitors to monasteries on the mountain's western side prefer to stay on the ferry and disembark at the monastery they wish to visit.

Only males are allowed entrance into Mount Athos, which is called "Garden of the 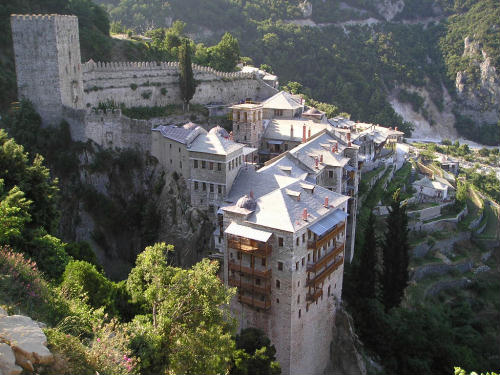 Virgin" by monks,and Orthodox Christians take precedence in the permit issuance procedure. Only males over the age of 18 who are members of the Eastern Orthodox Church are allowed to live on Athos, either as monks or as workers.

Prohibition on entry for women

There is a prohibition on entry for women, calledavaton(Άβατον) in Greek, to make living in celibacy easier for those who have chosen to do so. Monks feel that the presence of women alters the social dynamics of the community and therefore slows their path towards spiritual enlightenment.

Today the 20 monasteries of Mount Athos are the dominant holy institutions for both spiritual and administrative purposes, consolidated by the Constitutional Chart of the Holy 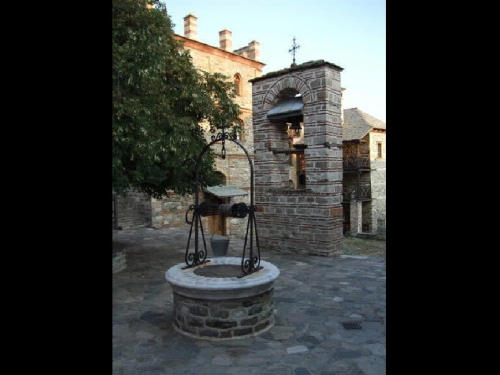 Mountain. Although, since the beginning of Mount Athos' history, monks were living in lodgings of different size and construction quality. All these monastic lodging types exist until today, named as seats, cells, huts, retreats, hermitages, caves, sketae and all of them are known under the general term "dependencies" of the Holy Monasteries. The term "cells" can be used under a more generalized meaning, comprising all the above but sketae, and following this term we can talk about three different kind of institutions in Mount Athos: monasteries, sketae and cells.

A pilgrim/visitor to a monastery, who is accommodated in the guest-house can have a taste of the monastic life in it by following its daily schedule: praying (services in church or in 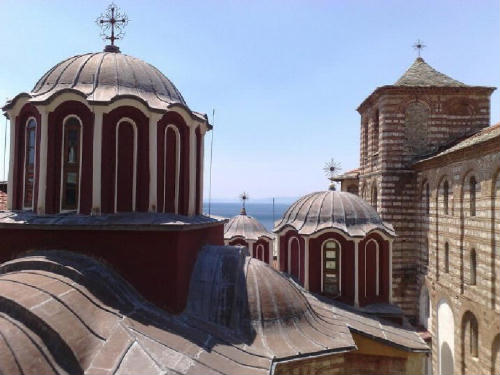 private), common dining, working (according to the duties of each monk) and rest. During religious celebrations usually long vigils are held and the entire daily program is radically reshaped. The gate of the monastery closes by sunset and opens again by sunrise.

A cell is a house with a small church, where 1–3 monks live under the spiritual and administrative supervision of a monastery. Monastic life in the cells is totally different from that in a monastery. Some of the cells resemble tidy farmhouses, others are poor huts, others have the gentility of Byzantine tradition or of Russian architecture of the past century. Usually, each cell possesses a piece of land for agricultural or other use. Each cell has to organize some activities for inc 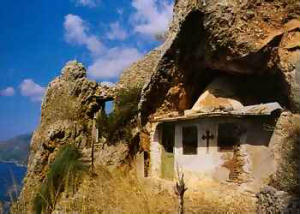 ome. Besides the traditional occupations (agriculture, fishing, woodcarving, spirit distillation, iconography, tailoring, book binding etc.) new occupations have been taken up, for example taxi driving, couriers, car repairing and computer services. The monk(s) living in a cell, having to take care of all daily chores, make up their own schedules. For the pilgrim/visitor it is worth experiencing this side of monastic life as well, but most of the cells have very limited or no capacity for hospitality.

Small communities of neighboring cells were developed since the beginning of monastic life on Mount Athos and some of them were using the word "skete" meaning "monastic settlement" or "lavra" meaning "monastic congregation". The word "skete" is of Arabic origin and in its original form is a place-name of a location in the Egyptian desertIt is in the Egyptian desert where monasticism made its first steps. This is exactly the main idea of a "skete", the communal way, just between the hermetic way and the coenobitic way of monasticism, with all 3 coexisting until today.