The Monastery Of Saint John Of Patmos

One of the most beautiful and distinctive of the Dodecan 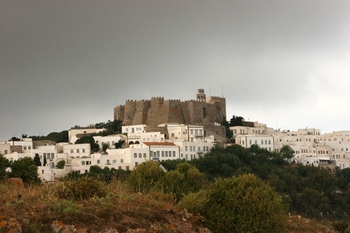 ese Islands, Patmos is best known as the place where St. John received his visions and wrote the Book of Revelation.

A small island with a population of about 3,000, Patmos has managed to remain one of the least touristy of the Greek islands, despite its many visitors and firm presence on the cruise circuit. It remains delightfully unspoiled, yet it has still developed a good tourist infrastructure, with a number of excellent restaurants, hotels and beaches.

Patmos is located in the South Aegean Sea near the island of Kos and not far from Turkey. There are two main "towns" on Patmos: Skala, the harbor area and where most of the residents live; and Chora the hilltop area dominated by the Monastery of St. John. The monastery and the nearby Cave of the Apocalypse, where the revelations took place, are major pilgrimage destinations and popular tourist sights as well. Many package tours and 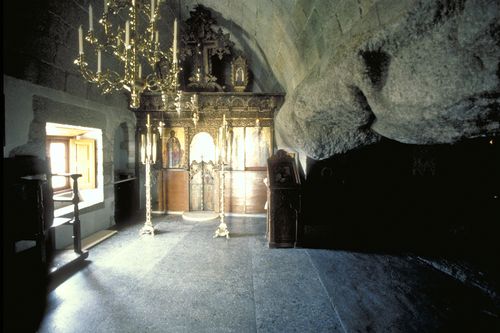 cruises stop in Patmos and there are frequent ferry and hydrofoil services.

In 1088, the Byzantine Emperor Alexios Komnenos gave the island of Patmos to the soldier-priest Ionnis Khristodhoulos "the Blessed." The greater part of the monastery was completed by Khristodhoulos in just three years. Its heavily fortified exterior was necessitated by the threats of piracy and Seljuk Turks.

The monastery consists of interconnecting courtyards, chapels, stairways, arcades, galleries and roof terraces. Hidden in the walls are fragments of an ancient temple of Artemis that was destroyed in the 11th century. The main chapel is lovely, as is the adjoining Chapel of the Theotokos, whose frescoes date from the 12th century. 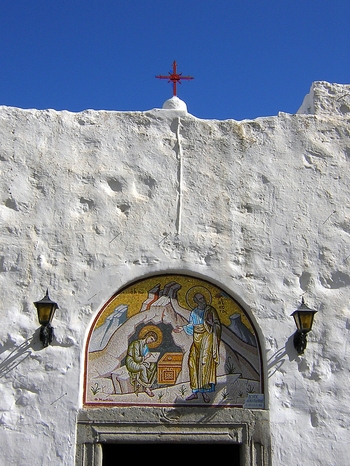 The Treasury has an impressive array of religious art and treasure, mainly consisting of icons of the Cretan school. The star exhibits are an unusual mosaic icon of Agios Nikolaos and the 11th-century parchment granting the island to Khristodhoulos.

About halfway up (or down) the cobbled path that leads here is the Cave of the Apocalypse, the very place where St. John is believed to have received his revelations.

About halfway up to the Monastery of St. John on Patmosis the Cave of the Apocalypse. This sacred grotto is believed to mark the spot where St. John received

his visions from Christ that he recorded in the Book of Revelation. 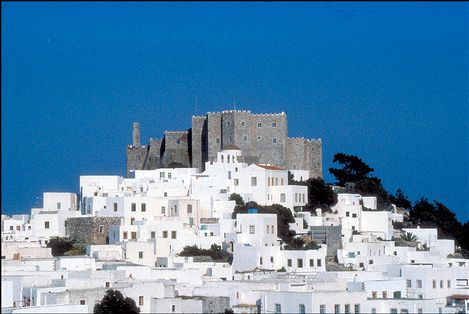 "I, John, your brother and companion in the suffering and kingdom and patient endurance that are ours in Jesus, was on the island of Patmos because of the word of God and the testimony of Jesus. On the Lord's Day I was in the Spirit, and I heard behind me a loud voice like a trumpet..." (Revelation 1:9-10)

St. John the Theologian, commonly identified with the Apostle John, was exiled on Patmos around 95 AD and received revelations from God by means of a voice from a cleft in the rock.

It is thought by some scholars that John was from Ephesus, which is a short boat ride from Patmos and which received the first of the letters addressed to the Seven Churches of Revelation.

A sanctuary and the Monastery of the Apocalypse were later built around the cave that tradition identified as the site of John's visions.

The cave entrance is marked with a mosaic portraying the visions of John and inside the small grotto, you can see the nightly resting place of John's head, fenced off and outlined in beaten silver.

Available here is a brochure written by Archimandrite Koutsanellos, Superior of the Cave, which provides an excellent description of the religious significance of each niche in the rocks, as well as the many icons in the cave.