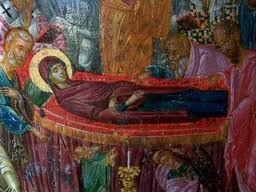 One of the biggest celebrations of Orthodoxy is August 15, the day of the Assumption. The Virgin Mary has been given many names in Orthodoxy, depending on the way she was iconographed, the theological status, the age of the icon, the way the icon was found, and the place of origin of the icon. There are also names given to her depending upon the time her celebration fell on. The icons of the Virgin were claimed to have been found in many cases in miraculous ways, which motivated Christians to establish churches in her name.Thousands of believers flock each year to worship the image of the Virgin Mary and plead for help. Churches and monasteries dedicated to the Virgin Mary welcome visitors to brilliant festivities on August 15th, the day of Her Assumption.

This day, dedicated to the Virgin Mary, is not a day of mourning for her loss, but a celebration of joy for the union of the mother with her beloved son, the blossoming of nature, the flood of emotions, and the return of people to their native land.In every region of Greece, there is a ritual associated with that day. Customs and old traditions revive on August 15th. Here are some of the most popular celebrations from all across Greece:

Island of Tinos – Panagia of Tinos 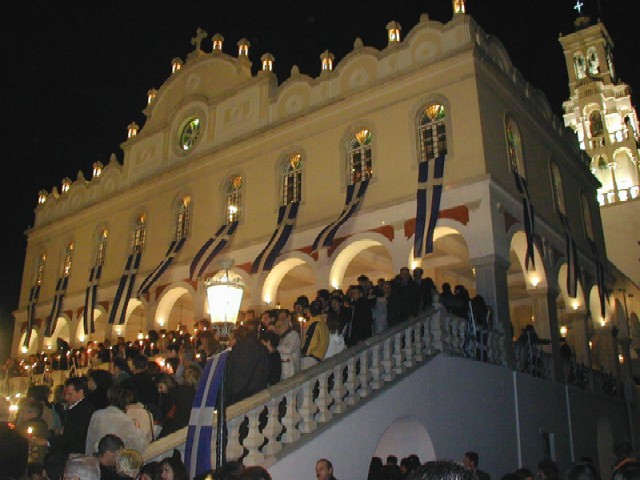 The pilgrimage to Panagia of Tinos is probably the largest religious pilgrimage of Hellenism.The island is completely associated with the Virgin Mary, andthousands of believersflock to the island every year to venerate the miraculous image of Mary in the Church of the Blessed Virgin and to say their vows.The image of believers kneeling or climbing the stairs up to the icon is the most characteristic.The procession of the epitaph of the Virgin Mary is similar to the procession of the Epitaph of Christ on Good Friday, with thousands of believers to follow with lighted candles.The festival lasts until August 23 and, along with celebrations for the Virgin Mary, the island celebrates the anniversary of the sinking of the battleship Elli by Italians which took place shortly before the war withItaly, in mid-August 1940. 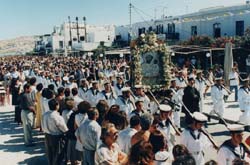 One of the most impressive churches in the Aegean, the early Christian church's Ekanontapyliani, is located in Parikia, the capital of Paros and it is one of the oldest and best preserved Christian churches. Believers from all over Greece gather here in mid-August to venerate the image of Panagia Ekatontapyliani (created in the 17th century) and take part in the festivities.After the procession of the epitaph, begins the great festival of the people, partying until the early hours, with traditional music, Parian wine and local delicacies.At the same time, in the port of Naoussa Paros, dozens of boats approach the pier with lit torches.The view becomes more impressive with the arrival of ‘pirates' who start the festival with island dances, especially the ”Balo” dance.

Imathia (Kastania) – Panagia Soumela
Thousands of believers from all over Greece and abroad flock each year to attend the events that take place in Panagia Soumela, the historic church located on 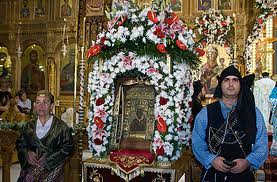 the slopes of Vermion, near the village Kastania. The church was built in 1951 by refugees from Pontos, in memory of the historical monastery, the ruins of which are located on Mount Mela, near Trabzon in the Black Sea.Here exists the miraculous image of Our Lady, crafted by Evangelist Luke. On Assumption Day, the procession of the holy icon of the Virgin Mary is followed by many believers. On top of this great festival of Christendom, Pontian bands from Macedonia offer unique moments with traditional tunes and a long lasting celebration. 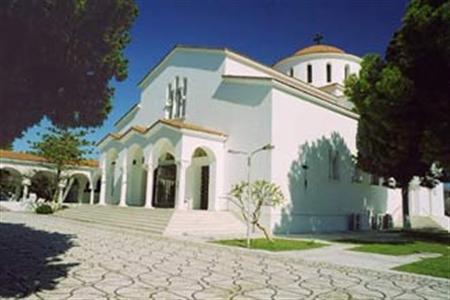 Island of Lesvos (Agiassos) – Virgin Agiasotissa
Most of the pilgrims, starting from the city of Mytilene, walk 25 km to reach the churchyard, where they stay overnight.On the feast day of Our Lady, after the procession of the icon around the church, festivities begin with lots of music and dance events in the village square. Local festivals, street vendors, dance groups and folk bands are all part of the traditions in Agiassos, on the A 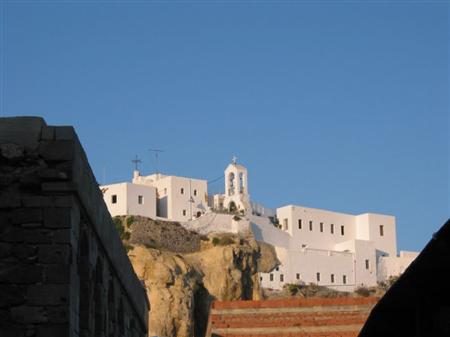 Island of Nisyros – Panagia Spiliani
This custom is dedicated to the woman. Women dressed in black take a leading role in the religious activity.They stay at the monastery of Panagia Spiliani inside the castle of Knights, worship and clean the area and the sacred vessels. Two parallel religious rituals take place – one by the priests and the other by the women in the role of priestesses that follow strict fasting, doing 300 prostrations every day and singing.On the day of the Assumption, the mass is followed by a procession around the icon of Virgin Mary to the village to bless the feast.The priestesses hold trays with boiled wheat and pave the way to the sacred icon.The feast starts when the icon arrives at the village, with the traditional dance of "koupa”, singing and drinking plenty of wine, while Enniameritisses withdraw. 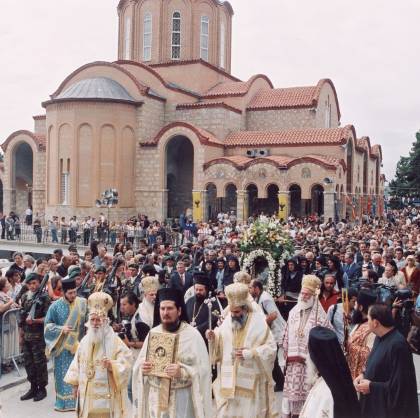 On the island of Patmos, the island of Orthodoxy, where everything revolves around the historic Monastery of the Apocalypse, the monks follow the custom of the Epitaph Mary, a custom of Byzantine origins.The gold epitaph of Mary wanders the streets of the island in a grand procession, while the bells of the monastery and other churches ring incessantly.

Kefalonia – Lady Fidousa
Numerous believers gather each year in the courtyard of the Holy Monastery of Panagia Fidousa in Markopoulo, Kefalonia to see the "Lady of the Snakes.”Every August 15, small snakes appear in the belfry and the church committee collects them in the yard of the Holy Temple.According to the tradition, snakes bring good luck to the island. If they do not appear, it is a bad omen, as happened, for example, in the year of major earthquakes in Kefalonia, some decades ago. 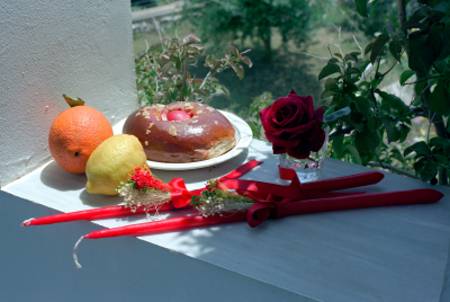 Easter is the one of the most sacred holidays for people in Greece. In the Orthodox Church the feast of Easter is officially called Pascha, the word which means the Passover. It is the eternal Passover from death to life and from earth to heaven.

Easter (Pascha) begins on the Saturday of Lazarus (the Saturday before Palm Sunday) with children and their teachers being very happy because they will spend two weeks far from school.

The Christian symbolism of Easter was first underlined by the Apostle Paul. When the Christians began to celebrate Easter, they retained some of the features of the Jewish Passover, while at the same time adding others. This can be seen from the paschal lamb and the red eggs.

People gather in church every evening throughout Holy Week, especially on Holy Thursday, Good Friday and on Holy Saturday, the night of the Resurrection. 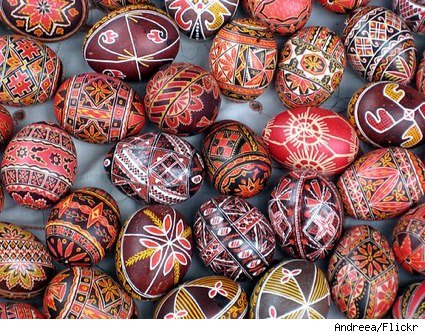 Holy Thursday is the day for dyeing eggs red. The egg, is a symbol of life, while red is the color of life.

In the evening, after the reading of the 12 Gospel, the girls undertake the decoration of the Bier of Christ (Epitaphios) with garlands of flowers, so that in the morning of Good Friday it is ready to receive the image of the body of Christ when He is taken down from the Cross.

Good Friday, the Procession of the Bier

Good Friday is a day of mourning. The drama of the death of Christ is followed with great devoutness. The icon of Christ is taken off the cross, wrapped in linen and put it in the Bier (Epitafios) symbolizing the tomb of Christ.

Late at night the bier is carried through the town or village. A band or choir playing or 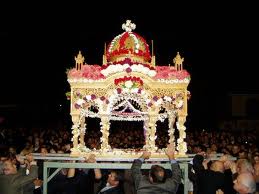 singing solemn music precedes the procession; they are followed by the cantors, the clergy, women bearing myrrh, the altar boys carrying the liturgical fans, scouts and guides, and the people of the region, who sing the hymns throughout the procession. All along its route, people scatter flowers and perfumes on the Epitaphios (bier), holding lighted candles in their hands. It is difficult to speak about Easter in Greece without getting emotional. It is even more difficult to speak about the night of Good Friday and keep my emotions out of this text.

There is something special about this night. The air is full of the scent of flowers, it is still but not heavy, there is a melancholic feeling all over but there is also something different. There is a feeling of stillness, emptiness, calmness and the hearts seem to open to accept the Love of Jesus' sacrifice. This is more likely to experience in a small village but it is obvious also in bigger towns in the more remote and quiet neighborhoods.

On Holy Saturday evening, the Resurrection mass takes place. One hour b 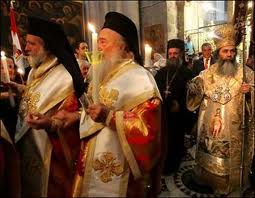 Later during the mass, all lights in the church will be turned off and then the priest will exit the altar with a candle lit by the Holy Light. The Holy Light is transferred by plane from Jerusalem, where it appears in a miraculous way in the Holy Sepulchre (Tomb of Christ). Read more about the Holy Light.

The Holy Light is distributed by the priest to all people in and out of the church. If people can get back home without their flame going out it, is said they will have a good year.

A few minutes before midnight everybody together with the priest exits the church and, exactly at midnight, the priest announces the resurrection of Christ (Christos Anesti):

"Christ is risen from the dead, trampling down death by death, and upon those in the tombs bestowing life"

After the late-night resurrection service of the Greek Orthodox Church, resurrection soup 'Mageritsa' is served to the congregation.

On Easter Sunday, spit-roast lamb is the centerpiece of the table. In the early morning, the spits will be turning in the courtyards and as the lamb, "kokoretsi" is slowly cooked, and the aroma of the roasting lamb whets the appetite of the hungry souls. Christopsomon, a round, flat loaf marked with a cross and decorated with red Easter eggs, is another Greek Easter delicacy that should not be missed out, when you are celebrating Easter in Greece.