Αrrive in Athens to start your journey for a life-changing experience. Meet and assist at the airport and transfer to the centre of the city. On route to your hotel you w 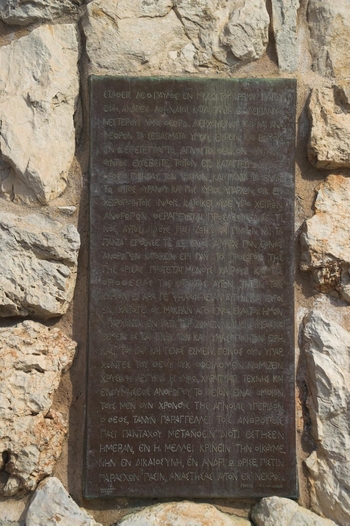 ill have a first glance of the ancient treasures and Christian history in a condensed city tour with the bus where our guide will point out the House of Parliament, the Tomb of the Unknown Soldier, and Presidential Palace and the Panathenaic Stadium, also known as the Kallimarmaro (the "beautifully marbled"), an athletic stadium in the centre of Athens that hosted the first modern Olympic Games in 1896. Check into your Hotel and have the remainder of the day free to relax or take a stroll along the streets of Athens to enjoy the flavour of the city. Evening free.

Early morning visit the Acropolis fabulous New Museum from where you can have a magnificent view of the Parthenon and Erectheum before viewing Athens atop Mars Hill where Paul stood and preached the truth to the Gentile nation. Visit also the Agora (ancient market place and centre of Athenian public life) . A short walk through the narrow streets of the Old city, the famous Plaka with a multitude of shops and cafes. Evening Free.

Following breakfast this morning you will depart Athens travelling west to the Peloponnesian peninsula, after short stop at the Corinth canal Isthmos you will arrive to the ancient city of Corinth, another treat for the New Testament scholar. Corinth is the city that inspired many of Paul's most familiar letters. See the Archaeological Museum, the Market Place, the Bema, and the Temples. To enjoy a devotional in the midst of the ruins of the church of Corinth and see the pillars, steps, and public worship place where Paul preached will enhance your understanding and love of I & II Corinthians. The ruins of this important cultural centre are fascinating as we walk along the stone path that the Apostle Paul walked. The engineering skill and intellect of these people are evident in the water systems that still flow from ancient to modern day. Our guide will be sure to show you the room dedicated to the medical care of that period. After the visit to ancient Corinth we travel to Mycenae where the remains of the ancient city date back to the Bronze Age to see the famous Lionesse Gate, the Tomb of Agamennon in the shape of a Beehive, and many other sites, before returning to Athens. Evening Free.

Following breakfast this morning you will depart Athens travelling northward past Thermopylae where the famous Spartan battle of 300 took place. Continue through the mountains to the picturesque town of Kalampaka at the foot-hill of Meteroa. Here you will see the world famous Byzantine monasteries that are perched precariously on summits of grey rock pinnacles of varied and beautiful shapes. Their history goes back to the 14th century when the monks sought refuge in the cliffside caves then fled higher to build the original wooden shelters, later transformed into monasteries. Overnight in Kalampaka. 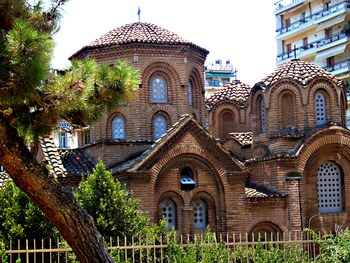 op will be a visit to King Phillip's (Alexander's father) tomb in Vergina, one of the most outstanding finds in all of Greece. You will then make the short trip to nearby town of Veroia to view the synagogue where Paul preached, the Bema surrounded by mosaics of Paul and the plaque of scripture regarding the "more noble" church. The New Testament books of I & II Thessalonians will come alive as you arrive in the delightful harbour city of Thessaloniki. En route to the hotel you will view the old city ramparts; the newly excavated Forum, St. George Church, an ancient Roman monument which was transformed into a church and the Galerius Arch which rises over the famous Via Egnatia. Evening Free in Thessaloniki.

wall to the citadel for a panoramic view of the city. Next, will be a visit Philippi and Kavala, one of Greece's prettiest mainland ports with a most elegant harbour. Paul landed here with his disciples, Timothy and Silas. Luke, the Evangelist, also came here from Troas. This ancient city of Neapolis was later renamed Christoupolis because it was the first European city to accept Christianity. Imagine walking on the same road as these men of the Bible! You will see the Roman Aqueduct and the ruins of the Acropolis in this beautifully located city, known since the 5th century as Kavala. Continue on to Philippi where Paul preached his first evangelical sermon and baptized the first Christians on European soil. You will view the baptismal site where Lydia surrendered her life to Christ and visit a crypt dating from the Roman period that is thought to have served as a prison for Paul. See the famous Acropolis, the Market Place, Basilica, and the Theatre. Return to Thessaloniki and visit St. Demetrius Basilica, dedicated to a distinguished member of the Roman army and a martyred Christian convert, before returning to the hotel for the final night.

Transfer to Macedonia airport in Thessaloniki for the return flight.