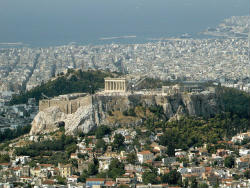 Αrrive in Athens and start your Religious Journey for a life-changing experience. Meet and assist at the airport and transfer to the centre of the city. On route to your hotel you will have a first glance of the ancient treasures and Christian history in a condensed city tour by bus, where our guide will point out the House of Parliament, the Tomb of the Unknown Soldier, and Presidential Palace and the Panathenaic Stadium, also known as the Kallimarmaro (the "beautifully marbled"), an athletic stadium in the centre of Athens that hosted the first modern Olympic Games in 1896. Check into your Hotel and have the remainder of the day free to relax or take a stroll along the streets of Athens to enjoy the flavours of the city. This evening you will enjoy the first of many delectable Mediterranean style dinners. 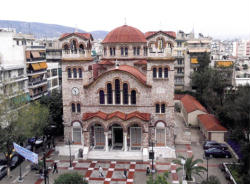 After breakfast today you will visit Athens, the foundation of democracy. Early morning visit the Acropolis, the Parthenon, and Erectheum before viewing Athens atop Mars Hill where Paul stood and preached the truth to the Gentile nation. Additional sites include the Agora (ancient market place and centre of Athenian public life) and the fabulous New Acropolis Museum. A short walk through the narrow streets of the Old city, the famous Plaka with a multitude of shops and cafes. You cannot miss the little church of "Panagia Kapnikarea” one of the most important Byzantine monuments in Athens in the middle of Ermou Street that dates back to 1050 and the Annunciation Cathedral, the Metropolitan Cathedral of Athens, popularly known as the "Mētrópolis" on Mitropoleos street. Evening free. 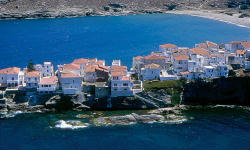 Early morning you will depart Athens travelling North to the port of Rafina, in order to take the boat to the island of Andros. After a short boat-ride arrive at the port of Gavrion to start our Christian tour with Panachrantou Monastery. According to tradition, the monastery was built in a place shown by the icon of the Holy Mother (Panachrantos). The icon is attributed to St. Luke and is still kept at the monastery on a stand next to the southern door to the altar of the main church of the monastery. This monastery also possesses the relic skull of St. Panteleimon. The relic and an icon of Panteleimon stand next to the Panachrantos icon and are the pride of the monastery as well as the island of Andros. We will continue to the Monastery of St. Nicholas which overlooks the Ahla valley, built in the 8th century.There are wonderful frescoes in the monastery and a superb wooden screen. The Byzantine icon of Panagia Blachernon, donated by the Monastery of Panagia Blachernon in Konstantinoupolis, is still kept here. Also the icon of Ag. Nikolaos which was made by the nun Leondia by weaving hair from her own head. It is the most active monastery on the island. Next to Agios Nikolaos is the Monastery of Agia Marina with holy water and the miraculous icon. Evening free to relax and enjoy a traditional cuisine at the local restaurants. 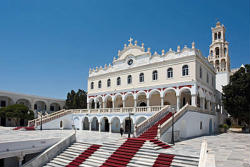 Today we will take the boat from Andros to the windswept "Sacred" island of Tinos,  our next stop in the Cyclades archipelago. There, in the centre of town a straight way from the port, you will have a pilgrimage to the church of the Megalohari where the sacred Icon, called "Panagia Evangelistria”, is kept. A beautiful portrayal of Virgin Mary kneeling with her head bent in prayer, regarded by scholars as being older than Byzantine period, it may perhaps be the work of the Apostle and Evangelist St. Luke. It is assumed that the Icon was a sacred object in the Byzantine church and was hidden or lost around the time of the Moslem invasions. Shortly after the discovery of the Icon, the construction of a new church begun. Numerous reports of miracles of healing rapidly, increased the fame of the Church of the Megolohari, with the result that today the Sacred Icon is the most venerated pilgrimage relic of the Greek nation. Continue our visit to some of the unspoilt inland villages around the isnland with arches, geraniums and basils, carved lintel, cobbled roads, threshing floors, terraced yards, cellars. Evening free to enjoy a peaceful overnight at the sacred island of Tinos.

Day 5: Tinos - boat to Syros the "Princess of Cyclades” 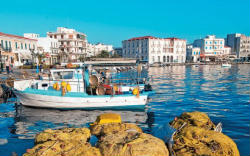 After breakfast, free time to enjoy perusing the beautiful Chora of Tinos with it's narrow alleys; bougainvilleas; the old port of Stavros and perhaps another visit at the Sacred Church of the Virgin Mary and the Gallery of Tinios Artists next to the church. After lunch depart by boat to Syros another Cycladic island with its wonderful capital, Ermoupolis, is the capital of all the Cyclades, full of beauties and charms created by its unspoiled landscape, its authenticity and its traditional villages. The town of the island is full of Venetian and neoclassical buildings which make it one of the most beautiful towns in the Cyclades. Evening free.

Day 6: Syros – boat to Patmos the "island of Revelation” 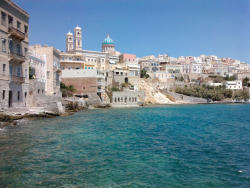 After breakfast, discover the chora of Syros. Climb along winding streets and marble steps to the top of the medieval Venetian settlement of Ano Syros surviving up to now, laying on the hillside and crowned by the church of Aghios Georgios (St. George) situated at the top of the hill, is the cathedral of the Catholic people of the island, who are numerous even today. There are also several buildings of actual interest as the Center of Historic Studies of the Catholic Diocese, the Catholic monasteries of the Jesuits and of the Capuchins, the Town Hall, the Archives of Ano Syros, the Cultural Center and the Exhibition of Traditional Professions. You should also see the bust of Marcos Vamvacaris, situated in a small square, very close to the Museum dedicated to this important popular musician, composer and singer whose influence on modern Greek music has been more than considerable. Late evening you will take the ferry-boat to Patmos the island of Revelation.

Day 7: Patmos – "the Cave of Apocalypse"

Around 02.00AM early morning arrival in Patmos and transfer to your hotel for a few hours of relaxation. After breakfast visit the Monastery of Saint John the Theologian a Greek Orthodox monastery founded in 1088. Today UNESCO has declared it a World Heritage site. It is built on a spot venerated by both Catholics and Eastern Orthodoxes as the cave where St. John of Patmos had visions. John is considered to be exiled to Patmos, undergoing a time of persecution under Roman rule. Revelation 1:9 states: "I, John, both your brother and companion in tribulation... was on the island that is called Patmos for the word of God and for the testimony of Jesus Christ.” This grotto is believed to mark the spot where John of Patmos or John the Evangelist as widely known, received his visions that he recorded in the Book of Revelation. Late afternoon get the ferry-boat, overnight return to Piraeus port-Athens.

Today, early in the morning you will arrive in Athens transfer to your hotel and have the entire day free to your leisure, to relax or go around the historic city shopping or have a special walking tour through the most popular Byzantine church in the centre of Athens. 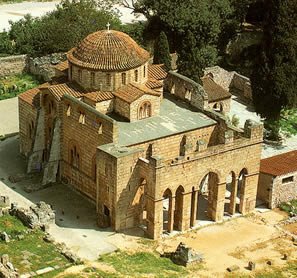 Early this morning depart for the Peloponnesos Peninsula. First stop will be only 11kilometres south of Athens for a visit at the Dafni Monastery declared a World Heritage Site in 1990 by UNESCO. After the 1999 earthquake in Athens, the monastery suffered serious damage and has remained closed for nine years. Now you will have access only to the court-yard where one can admire the unique architecture, because of the on going maintenance work still going on inside. Continue the route south to Peloponnesos shortly to arrive to the ancient city of Corinth, another treat for the New Testament scholar. Corinth is the city that inspired many of Paul's most familiar letters, visit the ruins of the church of Corinth and see the pillars, steps, and public worship place where Paul preached. Late afternoon return to Athens, evening free.