Walking around the Historical Churches of Athens

One of the best and most interesting Guided Tours is walking around the "Christian little Churches” of Athens historical centre. An easy walk from Syntagma square, following the narrow colourful streets of "Plaka” – Athens Old city– will be a journey through times. Passing underneath the Acropolis Hill, by the Ancient Market the route will lead you to the modern "Flea Market” in Monastiraki area and to the most popular commercial street of Ermou for today's best shopping.

Starting with a visit to: 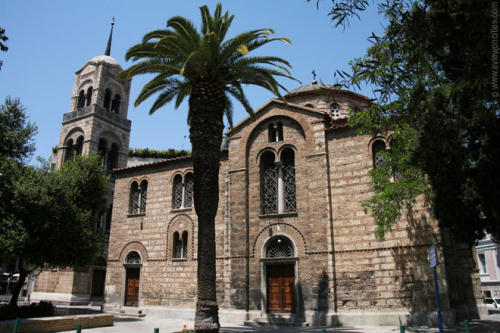 The church is a domed octagon. It is best known as Russian church, since it was bought by the Russian community of Athens in the 19th century. An inscription places it around 1031. No wall paintings are preserved, while the more recent ones are painted by Loudovikos Thirsios (1847). The high bell-tower was added at the time the Russian community obtained it for its religious needs.

We continue down on Kydathineon street to the church of

It is thus named after the Kottakis family, who used to own it. It is a complex, four-columned, cross-in-square church dated to the first half of the 11th century. It has been severely damaged, while no wall paintings from the Byzantine period are preserved.

Next stop – Monastiraki square and the little church of

The church, which is one of the oldest and less known churches in Athens, is dedicated to Panagia Pantanassa. It is celebrated on the 15th of August, the day of the Assumption of the Virgin Mary. It is located in Monastiraki Square, which is named afte 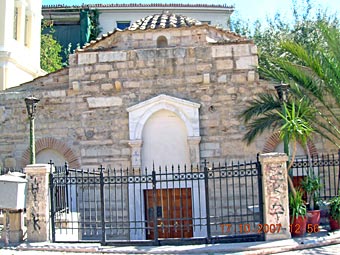 r it. The church is referred to as Big Monastery in a post Byzantine sigillium of 1678 and it is thus named during these years. Furthermore, in the same document it is mentioned that during the period of the Frankish rule it was annexed as a men's monastery to Kaisariani Monastery. During the period of the sigillium the monastery functioned as a convent. From 1690 onwards the church became parish, same as the Kaisariani Monastery. From the revolution onwards, the church was no longer called Big Monastery but Mikromonastiro (Small Monastery) or Monastiraki. The monastery cells used to be in the location of today's Square, while the whole area was full of small shops, many of which can still be found in the neighbouring Pandrosos Street.

The wall paintings are more recent. The church has undergone many modifications. Characteristic is the bell-tower, which is a more recent construction and annex. 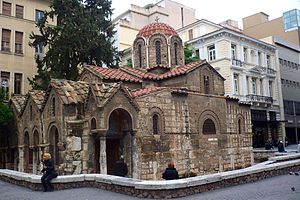 Continuing on Ermou street, one of the busiest commercial streets of Athens centre we come to Kapnikarea church

The most well known Byzantine church in the centre of Athens, situated on Ermou Street is dated to the 11th century. It is a complex, four-columned, cross-in-square church. The exonarthex extending all over the western side of the church was added in the third quarter of the 11th century. A chapel has been incorporated in the north of the church. It is dedicated to Hagia Barbara and is dated towards the end of the Turkish domination. The name may derive from the tax kapnikon. Therefore, it may be related to the founder, á tax collector, the kapnikarius. However, it could be related to the valuable textile, kamouha. The surviving wall paintings are recent; in fact have been painted in the 20th cenury by Fotis Kontoglou and his pupils, a school mainly influenced by Byzantine tradition. 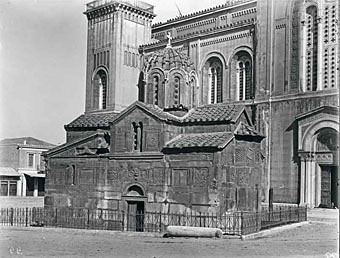 Walking on Mitropoleos street, right next to the Metropolitan Cathedral of Athens we see the little church of Panagia Gorgoepikoos

The church is also known as Hagios Eleutherios or the Small Metropolis. It is situated next to the southern side of the Cathedral of Athens, in Mitropoleos Square. It is a cross-in-square church. The monument incorporates in a unique way 90 sculptures of different eras in its external walls. It resembles an open-air exhibition of sculptures, which are dated to the ancient, roman, early Christian centuries, but also to the middle Byzantine period. M. Chatzidakis associated the church with the bishop of Athens, Michael Choniates. The wall paintings are dated to the 20th century.