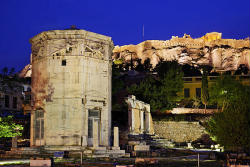 We will meet you at the airport of Athens. We will have a look at Athens, named in honor of their patron saint - the favorite daughter of Zeus, goddess of wisdom Athena. City tour by bus, where our guide will show you the Parliament, the Tomb of the Unknown Soldier, the Presidential Palace and Kallimarmaro Stadium (Panathinaikon Stadium), where the first modern Olympic Games took place. Visit the fabulous Acropolis New Museum from where you can have a magnificent view of the Parthenon and Erectheum before viewing Athens a top Mars Hill where St. Paul stood and preached the truth to the Gentile nation. Visit also the Acropolis Parthenon and the Agora (ancient market place and centre of Athenian public life). A short walk through the narrow streets of the Old city, the famous Plaka with a multitude of shops and cafes. We will visit the Metropolis Cathedral, where the holy relics of Gregory V the Constantinople Patriarch are, and the small Kapnikarea church. Check in to the hotel. Dinner and overnight. 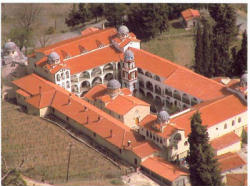 After our breakfast we leave Athens to Nea Makri where we visit the monastery of St. New Ephraim, where his sacred relics are. Then we continue our trip to Evia where some villages it seems to stop the time: traditions, customs, celebrations - almost indistinguishable from how it happened decades and centuries ago. we will visit the church of St. John the Russian. John, he was born in Russia in 1690. John was a soldier in the army of Peter, and was captured by the Turks, after he fiercely resisted all efforts to end the Turkish officer let him free quiet to keep his faith. He became famous humility and miracles during his lifetime and after his death. We will visit the monastery of Osios David situated in the heart of a dense area. In the church of the Monastery kept the fragrant and miraculous bones of St. David the Elder, the censer and stole of the Saint (Russian origin) and other precious relics. Also, around and outside the monastery you can visit many churches in memory of various saints. Do not forget to visit the hermitage of Saint David, covering walk a short distance to the cave where the hermit miraculous saint. Worth over from the basement chapel of St. Anargiron in the SE wing of the cells of the monastery, which gives you the opportunity to admire paintings of the 17th century. Dinner and overnight 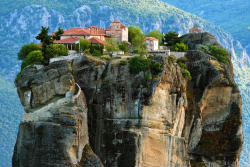 After our breakfast we continue our trip to visit to the monasteries of Meteora. Here you will see the world famous Byzantine monasteries that are perched precariously on summits of grey rock pinnacles of varied and beautiful shapes. Their history goes back to the 14th century when the monks sought refuge in the cliffside caves then fled higher to build the original wooden shelters, later transformed into monasteries. We will have the opportunity to visit the monasteries of St. Barbara, St. Stephen, St. Nicholas and St. Varlaam. Dinner and overnight.

This morning after our breakfast we depart from Meteora to Athens airport. Departure flight back home.